A Hong Kong bachelor pad gets a bold, bright and blue update

High-end hotels provide the inspiration for a Sheung Wan bolthole for a student studying overseas.

Interior designers may dream of having a free rein on projects. But as Wesley Liu recently discovered when creating a bachelor pad in Sheung Wan, working without a brief can also be a burden.

“There weren’t really any processes of approval,” says Liu, founder of PplusP Designers. “The client just passed the whole project on to me. I didn’t know what he’d think of it.”

But the designer need not have worried. “When it was all done,” Liu remembers, laughing, “he came in and was like, ‘Wow!’ It was just like a TV show.”

One of the first things Liu did was to knock down a wall between the living room and the kitchen, creating a sleek, open-plan space for entertaining. One request from the client, who likes to cook, was that he wanted to be able to serve his friends food and drink easily. “So an open-bar concept was best,” says Liu. Parties can also spill outdoors because the room opens to a balcony with sweeping city views of Poho (the area around Po Hing Fong) and Sai Ying Pun. 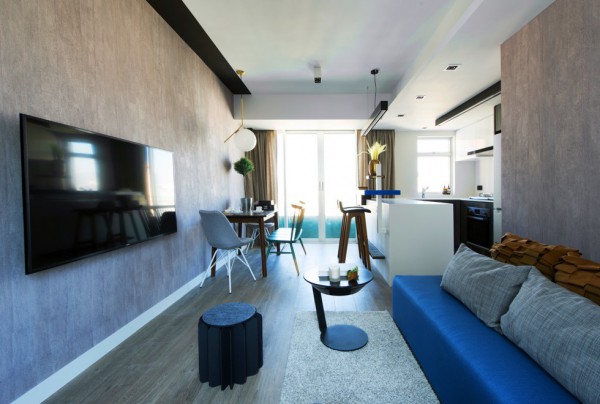