A Hong Kong flat where the kitchen takes centre stage 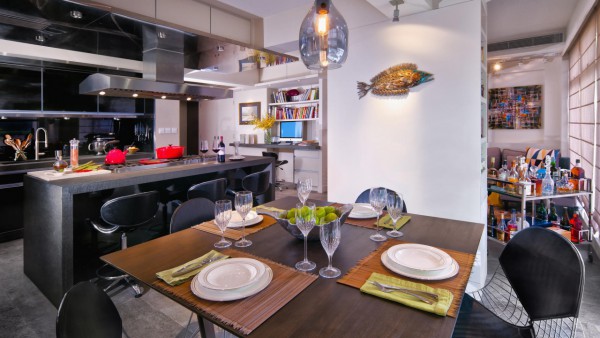 There's a reason people in Hong Kong eat out so often: in this city, it's a pain to cook at home. Kitchens are usually small and designed to be used by one person. For Paul and Morgaine McGee, it was a situation that didn't mesh with their lifestyle.

"We love to cook," says Morgaine. "We do it four or five times a week and it's always a massive spread."

The couple grew up in Connecticut, in the United States, but didn't meet until both were living in Hong Kong (Morgaine works in fashion and Paul in transport). Eight years ago, they had been dating for only a month when Paul decided to buy a flat in a 1960s building. He was living in a high-rise housing estate and was looking for something a little more intimate.

"I couldn't stomach the idea of a big, flashy lobby, and I wanted to live in a real neighbourhood," he says.

With the help of Morgaine, he found what he was looking for in a low-key corner of Mid-Levels.

The 1,137 sq ft apartment needed work, but when the dust finally settled on their first renovation, the McGees weren't entirely satisfied with the result. The kitchen had been squeezed into a narrow slither at the rear of the apartment, which made for some cosy evenings with guests. Two years ago, however, the couple decided to redo the flat and enlisted the help of a friend, architect Cameron Hestler.

This time it was a success.

"It's all about the kitchen," says Morgaine. A year before the second renovation, she had bought a Viking eight-burner gas range and oven. "I was keeping it in storage," she says. "I gave it to Cameron and said, 'Design an apartment around it.'" The result is a one-bedroom apartment oriented towards the living areas, with a large open kitchen, dining room and salon that are always ready to host friends for either casual drinks and tapas, or a big blowout, like the McGee's Christmas party, which drew 100 people.

Dining room Morgaine McGee found the dining table (HK$6,500). The dining chairs (HK$2,500 each) were bought from Sofa Sale (sofasale.com.hk). The sterling-silver fish on the wall was made by California-based artist Ruth Wright ([email protected]).