A family of four prefers to stay in and invite friends over, a renovation having given them ample space in which to play 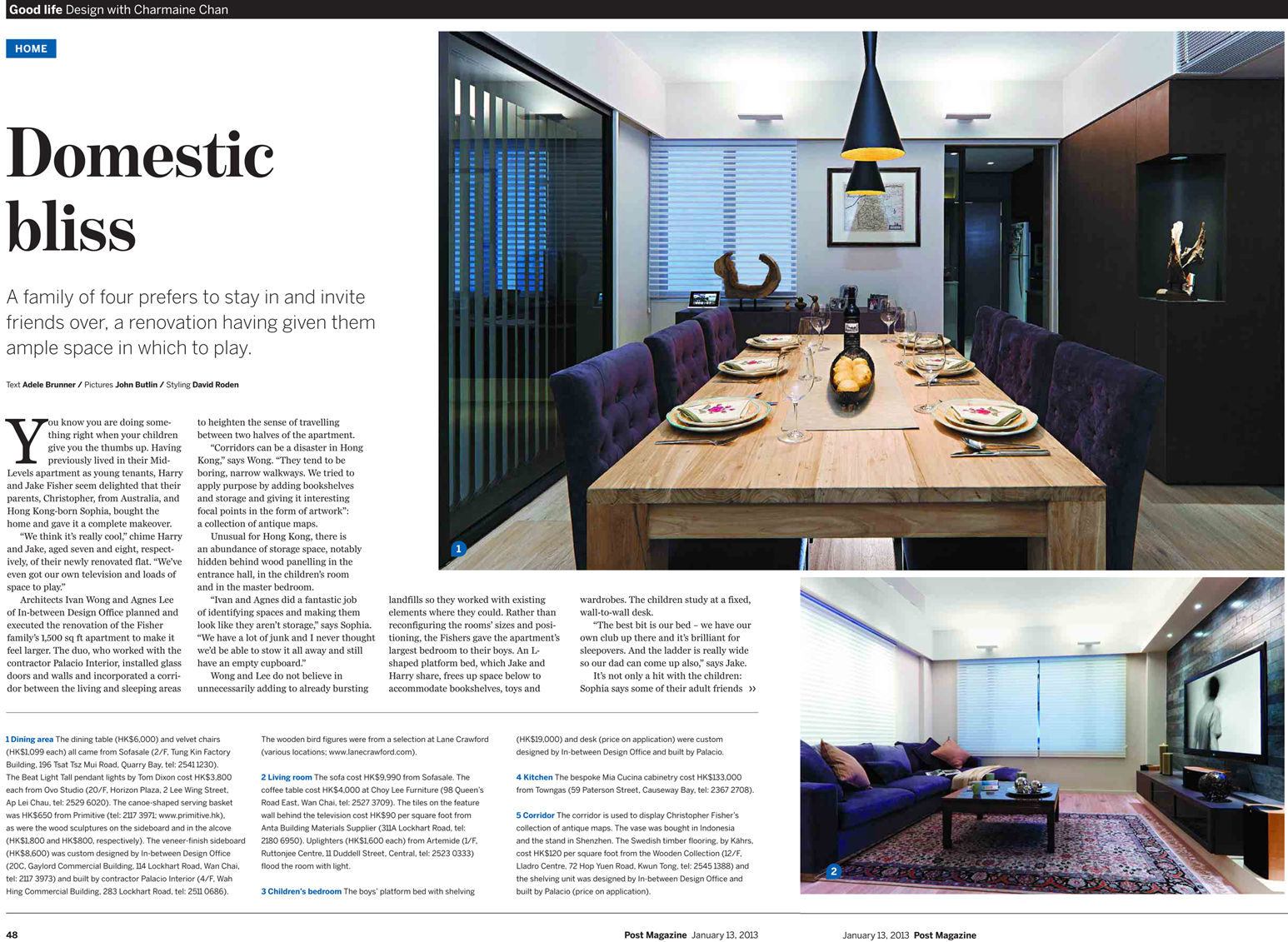 You know you are doing something right when your children give you the thumbs up. Having previously lived in their Mid- Levels apartment as young tenants, Harry and Jake Fisher seem delighted that their parents, Christopher, from Australia, and Hong Kong-born Sophia, bought the home and gave it a complete makeover. “We think it’s really cool,” chime Harry and Jake, aged seven and eight, respectively, of their newly renovated flat. “We’ve even got our own television and loads of space to play.” Architects Ivan Wong and Agnes Lee of In-between Design Office planned and executed the renovation of the Fisher family’s 1,500 sq ft apartment to make it feel larger. The duo, who worked with the contractor Palacio Interior, installed glass doors and walls and incorporated a corridor between the living and sleeping areas to heighten the sense of travelling between two halves of the apartment.

“Corridors can be a disaster in Hong Kong,” says Wong. “They tend to be boring, narrow walkways. We tried to apply purpose by adding bookshelves and storage and giving it interesting focal points in the form of artwork”: a collection of antique maps.Unusual for Hong Kong, there is an abundance of storage space, notably hidden behind wood panelling in the entrance hall, in the children’s room and in the master bedroom. “Ivan and Agnes did a fantastic job of identifying spaces and making them look like they aren’t storage,” says Sophia. “We have a lot of junk and I never thought we’d be able to stow it all away and still have an empty cupboard.”

Wong and Lee do not believe in unnecessarily adding to already bursting landfills so they worked with existing elements where they could. Rather than reconfiguring the rooms’ sizes and positioning, the Fishers gave the apartment’s largest bedroom to their boys. An Lshaped platform bed, which Jake and Harry share, frees up space below to accommodate bookshelves, toys and wardrobes. The children study at a fixed, wall-to-wall desk.“The best bit is our bed – we have our own club up there and it’s brilliant for sleepovers. And the ladder is really wide so our dad can come up also,” says Jake.It’s not only a hit with the children: Sophia says some of their adult friends enjoy climbing up for some rough and tumble with the boys, too.

Another challenge faced by the architects was the issue of light. The apartment’s windows were small, with individual panes and guardrails. Wong and Lee “cleaned” them up, making them larger and single-paned, and installed automaton (self-operating) lighting throughout the apartment that can be set to complement moods and needs. There are separate lighting systems in the master bedroom and bathroom, for example, so that Christopher, an investment banker, can see his way around without disturbing his wife when getting up for an early business flight.

“We are a layman family,” says Sophia. “We didn’t have a clue about lighting – we didn’t even think about it. It was great to have professionals thinking about it for us and giving us strong guidance.” Because Sophia works from home, she needed a private space to host virtual classrooms. Wong and Lee installed a tinted glass “wall” between the dining area and her office and installed a floorto- ceiling track blind.

“I can see what’s going on and still have all the privacy I need,” says Sophia.“The glass slides across so we can combine my office space with the living and dining areas and really open up the apartment, which we couldn’t do when it was a solid wall. The renovations took 5½ months to complete, from design to construction. The Fishers moved into a temporary apartment because three of them suffer from asthma, which the dust and fumes would have exacerbated. Now that they are back in, they do not want to leave. “Hong Kong families always go out,” says Sophia. “They typically don’t entertain at home because they don’t want their guests to feel uncomfortable in a small space, but we now love hosting dinners for friends. Our renovations have been such a success … we don’t want to be anywhere else. Just here.”